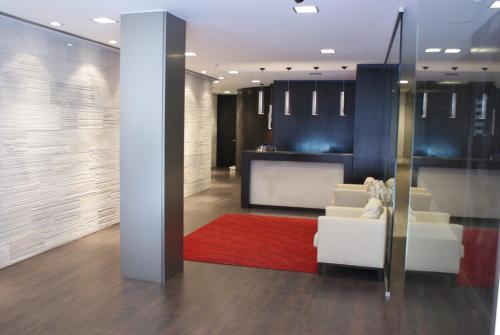 Set in the district of Centro this comfortable hotel is within easy walking distance of Granada Cathedral, Royal Chapel of Granada and the Madrasah of Granada.

The Universal Hotel Granada offers a convenient 24-hour reception as well as family/oversized rooms, porters and luggage storage. The hotel also offers breakfast in the room, a tour desk and room service. The hotel also has ski lockers during the winter months.

The air-conditioned rooms at the Universal Hotel Granada are spacious and comfortable. A private bathroom, a mini bar and a hair dryer can be found in each room of the hotel. A desk with an electrical outlet, a flat-screen TV and heating are also provided in every room.

Unwind with a coffee or enjoy an appetising breakfast at the Universal Hotel Granada's on-site cafe. Alternatively, there are a selection of other eating options around the hotel.

Situated close to a range of popular hot spots, the hotel is near lots of bars, nightclubs and fashionable places to eat. Shopping and a vibrant night life are only moments from the hotel's front doors.