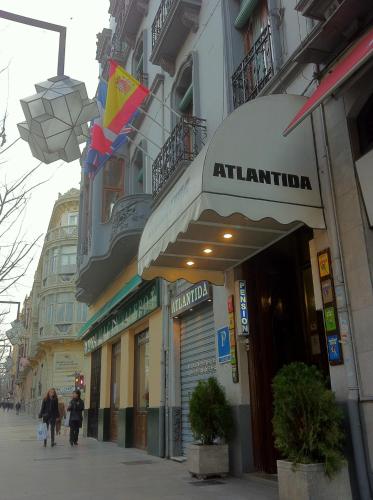 Set in the district of Centro this comfortable hostel is within easy walking distance of Granada Cathedral, the Monastery of Saint Jerome and the Madrasah of Granada. Surrounded by local bars and restaurants, it is under a 10-minute stroll from Granada Train Station.

The Hostal Atlantida Granada has a number of facilities including a terrace, luggage storage and a photocopier. The hostel also provides a lift.

All of the well-equipped rooms at the Hostal Atlantida Granada are equipped with heating and a ceiling fan.

The Hostal Atlantida Granada's district is known for its nightlife and you'll be spoilt for choice deciding on which place to go.

The hostel is a 10-minute walk from Royal Chapel of Granada, and an easy drive from Monachil. The hostel is set within 20-minutes' walk from the Archaeological Museum of Granada and the Castril Palace.